Major congratulations to “sdoyle8448” who took down 1st, 2nd, and 3rd place in the Relay Throw on DraftKings!

Last night delivered a wild 13 game MLB DFS slate.  In the Relay Throw on Draftkings with 100K up top we saw a remarkable performance out of “sodyle8448” who entered 11 lineups and cashed 6 of them while taking the top 3 finishing spots in the contest.  His best 5 lineups all featured Seattle Mariners stacks in some form or fashion, with the first place lineup featuring a 4 man mixed in with 2 mini stacks from the Angels and Royals who squared off against each other in a game where each team scored double digit runs.

The first thing you notice naturally when giving the lineup a once over is the low scoring at pitcher and how that did not prevent this lineup from reaching the top of the GPP.  This was a product of 2 of the 3 highest owned pitchers on the slate having complete duds for games.  Nestor Cortes (35.3% owned, 4.15 fpts) and Spencer Strider (34.5% owned, -.55 fpts) were key in that as long as you avoided them you got free of almost 70% of the field who rostered at least one of the pair.  Sean Manea (44.2% owned, 17.3 fpts) was the highest owned pitcher on the slate and turned in a decent performance while Marco Gonzales (3.3% owned, 14.95 fpts) was a nice contrarian play whose production was decent for his $7,100 price point.

At hitter, I’m not sure if this guy has a time machine and came back from today to enter these lineups or what but hitting on the contributing pieces across the Mariners while mini stacking the Angels and Royals pieces was *chefs kiss*.  Jared Walsh (6.4% owned, 31 fpts) and Shohei Ohtani (14.1% owned, 43 fpts) combined for a monster 74 fantasy points while the Royals duo of Whit Merrifield (7% owned, 16 fpts) and Bobby Witt Jr. (4.2% owned, 39 fpts) provided nothing to sneeze at, linking up for 55 fantasy points. 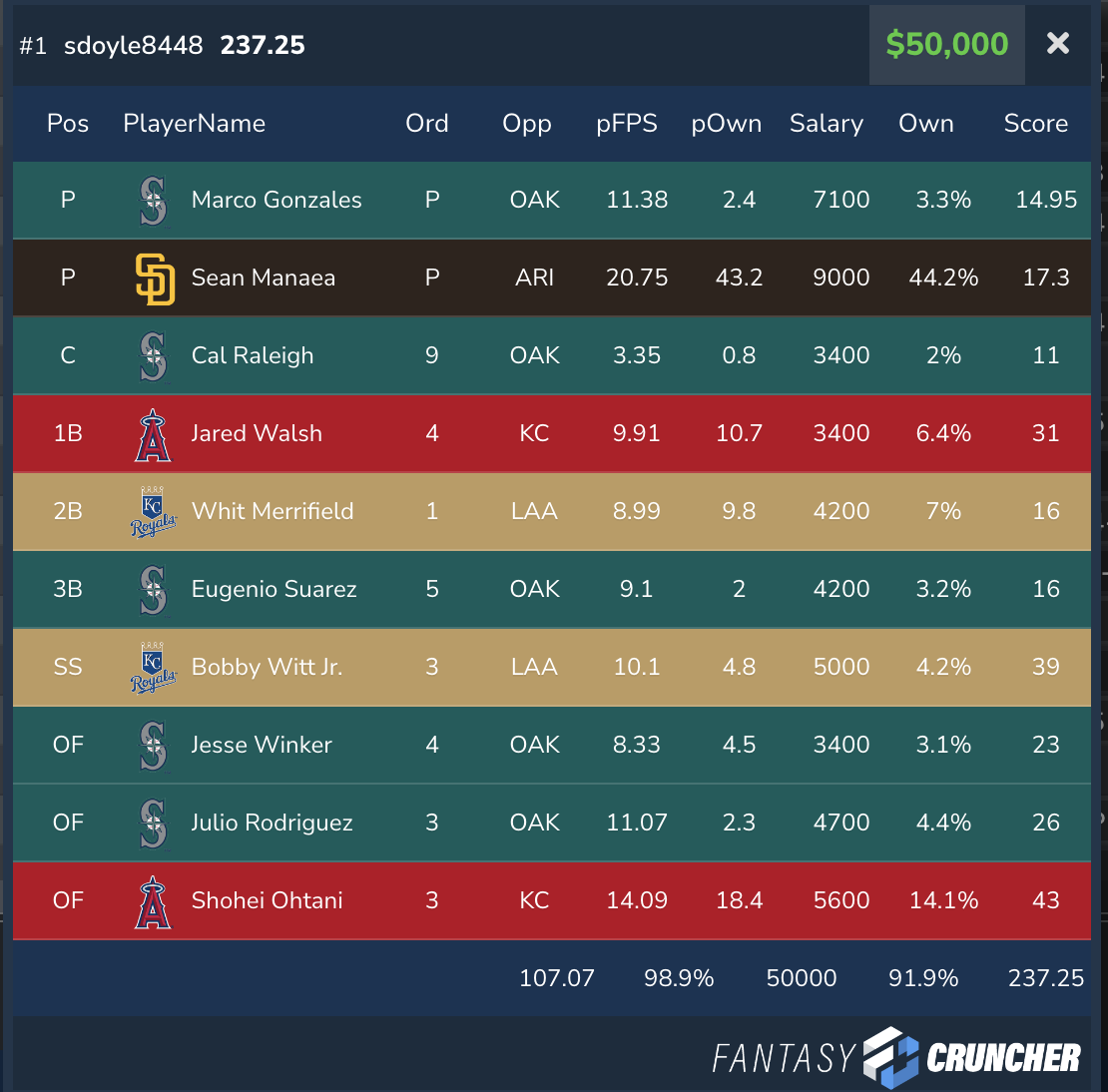 Key Takeaway:  Wow this guy absolutely crushed the Relay Throw last night, hats off to him.  On a slate where the pitching ownership was concentrated around 3 main guys, getting the one that didn’t bomb and having all the right pieces from the Mariners, Royals, and Angels explosive performances was key in a remarkable performance, profiting over 135K!

Lucas has been playing DFS since 2018. You can find his lineup review articles across MLB, MMA, NBA, NFL, and College Football on FantasyCruncher.