The All-Star Race is tonight and it features a bit of a different format than other races. 20 cars automatically have made the field, but four others will follow after an Open race (that is taking place right now) and a fan vote. The three winners of the three stages in the Open race will qualify for the All-Star Race that starts at 7 pm (CT) tonight and then one driver who wins the fan vote will join the full 24-man field. The race itself will have three 25-lap stages and then a final 50-lap sprint. The winners of the first three stages will start at the front for the final 50-laps.

Ultimately, from a DFS perspective, this one is kind of a mess. No matter where a driver starts, they could be shifted around the grid. Here is a helpful image courtesy of Nascar.com themselves that probably explains things a little bit clearer than I can through text. 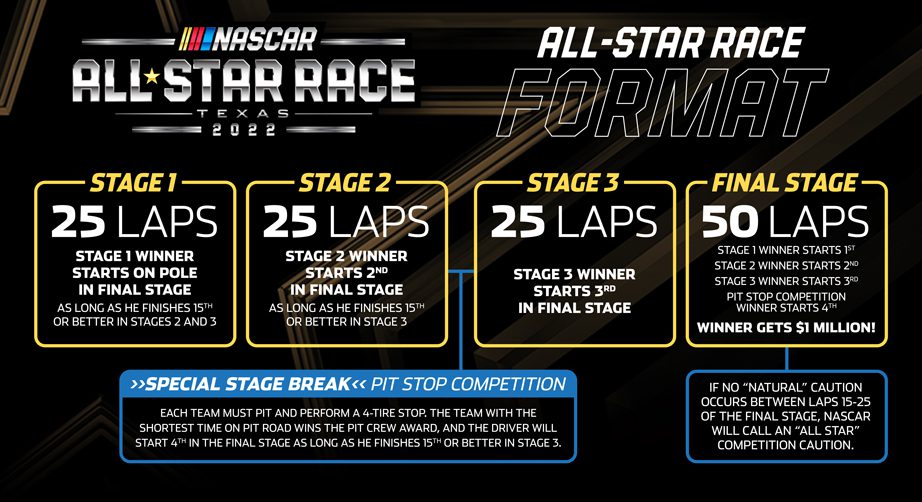 Since there are not a ton of laps here, stacking the front may not be our play. This also figures to be a pretty aggressive race but with only 24 cars in the field we may not have the back of the pack cautions that we have in a traditional 36-40 car race. Also as a note, only cars 1-20 are available to roster on FanDuel.

In terms of the track itself, Kyle Busch, Ryan Blaney, and Kevin Harvick grade out as the best three drivers here over the last three years. Kyle Busch has not started outside the top ten here since March of 2019. With Busch starting towards the front and some track confidence here, I have no issue rostering him to try to grab dominator points. I think several cars end up leading a lap here, however.

Kyle Larson is another name I like here as he has a tendency to show up in big spots. I would say a Million dollar prize is a big spot. Larson has always shown up at intermediate-sized tracks and in October of 2021, Larson led 256 laps here.

Alex Bowman is going to be starting from the back (24th) from his qualifying spot of 20th for some adjustments. Ultimately this isn’t an issue as the four spots shouldn’t break us and he offers us the highest differential ceiling here in regards to his skill level.

The price on Kurt Busch is very low here and the sixth starting spot is one that he should be able to hold or stay in the neighborhood of. I think this play goes under-owned but Busch has the confidence right now.

The four cars who make it in from the Open race that is going on right now (and the fan vote) will be starting in the 21, 22, 23, 24 spots. It goes without saying that all of those drivers will have a differential upside for us and all of them are going to fall at an $8,000 price tag or lower. I am leaving it up to the reader to pay attention to who those last three spots are – though as I am typing this Stage 1 just ended and Ricky Stenhouse was the winner, so we can lock Stenhouse into the field tonight.

I will update this article as the Open progresses, and as always, projections and starting grid will be updated on FantasyCruncher as the night progresses. Once the field is set, the Cheat Sheet will be updated