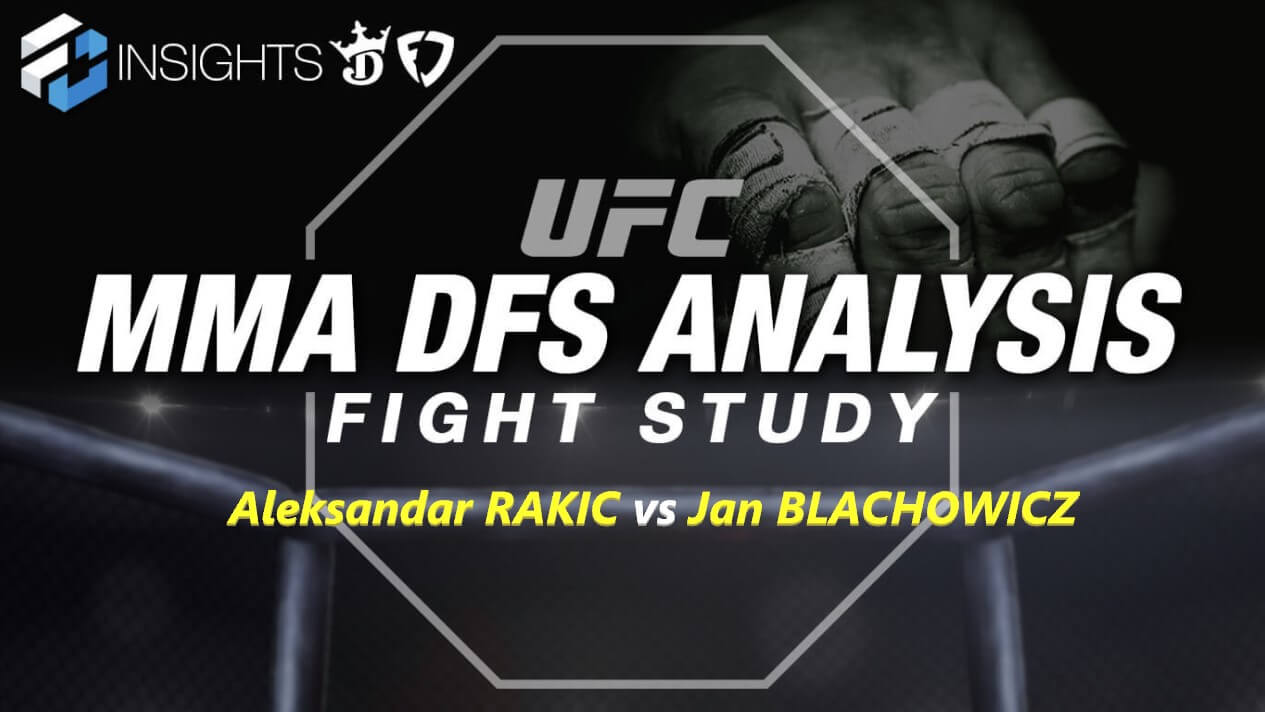 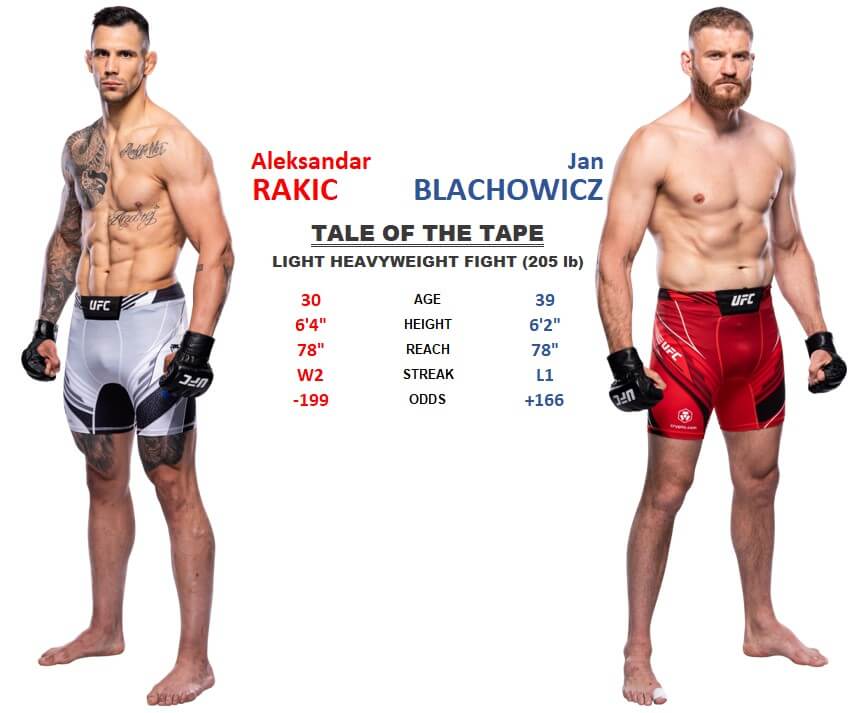 The UFC’s light heavyweight division will be on display when the division’s 3rd ranked contender, Aleksandar Rakic, faces the top-ranked contender, Jan Blachowicz, in a fight with future title shot implications. Rakic is on a two-fight win streak, and he will be the favorite against the former champ, Blachowicz. He is the more expensive play in DFS contests, and he is available in lineups for $8,700 on DraftKings and $22 on Fanduel. Blachowicz can be rostered for $7,500 and $15 respectively. As the Main Event, this fight has been scheduled for 5 rounds of fight action, however, current odds point toward an earlier conclusion as this fight is a -150 favorite to finish inside the distance.

Rakic has a professional record of 14-2 with 9 wins by KO/TKO, 1 win by submission, and 4 wins by decision. He is coming off of consecutive decision wins over Thiago Santos and Anthony Smith. Prior to that, he lost his first fight since 2011 in a split decision loss to Volkan Oezdemir. Rakic has great striking with speed and power. He will need to keep this fight upright as his opponent will have the edge on the ground, but on their feet, Rakic will have a great chance at winning. If Rakic is able to secure a win here, he is on the fast track to a title fight and an opportunity to win the light heavyweight belt. He cannot underestimate Blachowicz here, however. Blachowicz was able to handle Israel Adesanya who has phenomenal speed (if not the same size and power).

Blachowicz has an overall record of 28-9 with 8 wins by KO/TKO, 9 wins by submission, and 11 wins by decision. He acquired the light heavyweight belt with a win over Dominick Reyes in September of 2020, and he successfully defended his belt against the world’s greatest middleweight, Israel Adesanya, who attempted to become champ/champ but suffered his first-ever defeat to Blachowicz. He was submitted by Glover Teixeira in his next fight, however, and he relinquished the belt in October of last year. Blachowicz will be seeking another chance at the title with a win here. To do so, he must keep this fight in range where his power and grappling can be most effective.

Rakic is a very dangerous fighter, and this fight has the potential to be a quick one. Blachowicz will need to keep forward pressure, and if he can keep Rakic on his heels the fight should be a very close one. Still, this will make him vulnerable to Rakic who has 10 career finishes in 14 total victories. Once in the clinch, Blachowicz can begin to take control of things. If Blachowicz gets this fight to the ground, Rakic may be in real trouble. Even on their feet, Blachowicz has very good power and will have a puncher’s chance. Ultimately, Rakic is the favorite for good reason, but the odds in this one are much bigger than I would expect. It may be that Blachowicz’s age is a concern for the oddsmakers.

In DFS contests, Blachowicz is undervalued here. On DraftKings, this fight should be played heavily as both fighters are priced too low. On Fanduel, both fighters are priced more in accordance with their expected values. I like Blachowicz as an underdog play here, but do expect Rakic to win. Rakic has the finishing ability to get a big score here, but I expect Blachowicz to have his moments and prefer the Polish fighter slightly on both platforms and in all formats. This is a risky fight for Rakic in my opinion, but his scoring potential makes him very playable in GPP contests. On DraftKings, Blachowicz is priced well-below average and his value there is very enticing. Still, a finish could happen quickly with Rakic’s history, and both fighters carry a fair amount of risk here. DFS players would be wise to use both fighters with a degree of caution. 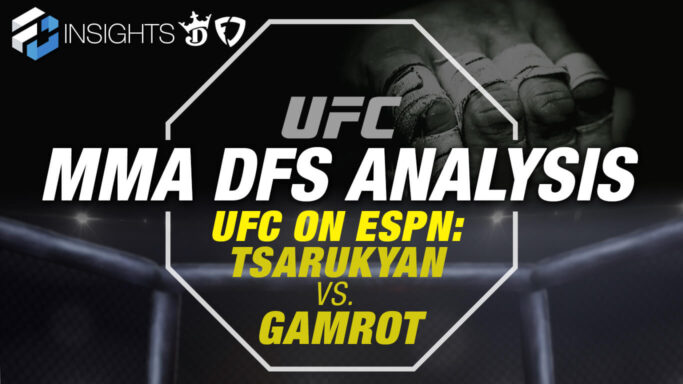 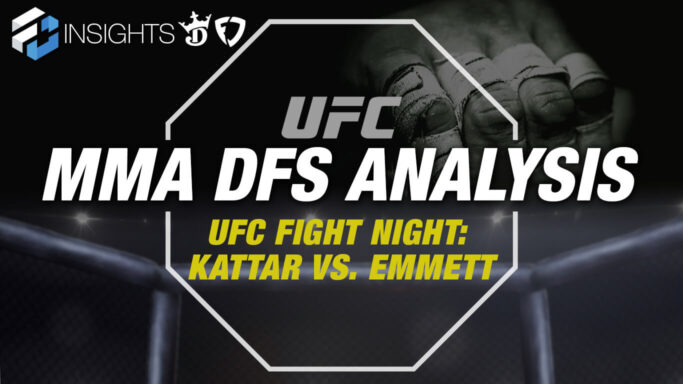 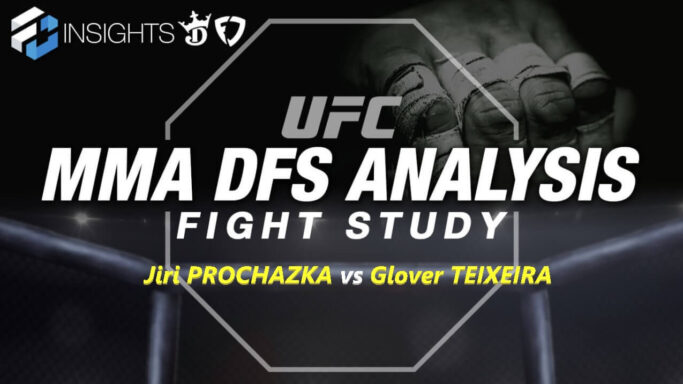 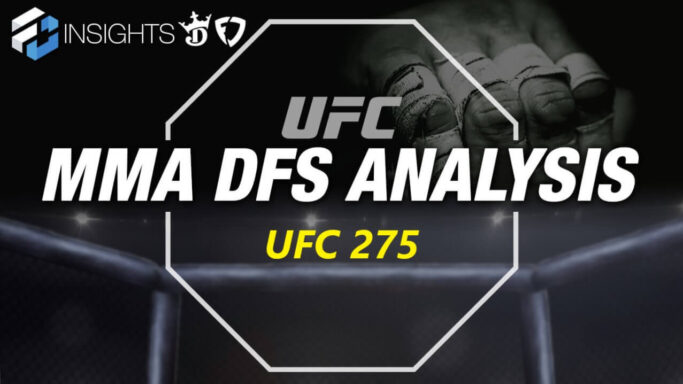