Fantasy Football Draft Season is upon us, and we have started to roll out our 2014 rankings!

This is the first edition of our rankings for the 2014 season.  Over the next couple of days we will be posting our RB, WR, TE, DEF and K rankings.  Throughout the year, we will be providing you with weekly rankings at each position to help you with all your fantasy matchups.  We want to help you win your league, and as such, we encourage you to let us know if you have any questions at all for us – either via comments below, or on Twitter.  You can follow us @moxyball, @bradsgotmoxy, @jaredsgotmoxy.

There isn’t much that has to be said about Manning.  He is set to be a force again in 2014 – with plenty of weapons surrounding him.  He should be the first QB off the board in all 2014 drafts.

Brees is a great consolation prize if you happen to miss out on Manning.  He brings consistency to the table, and will be as much of a lock as you can find for someone to finish in the top 3 in scoring at his position.

Rodgers may have fallen off the radar a little bit due to his injury last season – but make no mistake, he is still an elite option at QB.  Don’t be worried about Eddie Lacy being on the radar in Green Bay.  Rodgers will have plenty of time to shine and should have an excellent 2014 season.  Since 2008, Rodgers has been a quiet source of secondary production via the ground, scoring 18 majors…second only to Newton.

I outlined why I like Newton here.  For someone with the talent he has, he has been going far too low in fantasy drafts.  After the big three are gone – there is no one I’d rather have than Cammy at QB.

With tons of weapons at his disposal, it is hard not to like Stafford as a QB1 option.  He will put up points for you week in and week out.  If he ever took the next step as far as efficiency goes, he could crack the top 3 at the quarterback position.

Ryan had a very poor 2013 compared to what expectations were, but I do expect him to rebound.  The difference this year?  He will have his weapons back at his disposal.  Losing Julio Jones and playing with an injury riddled Roddy White severely took its toll on Ryan last season. 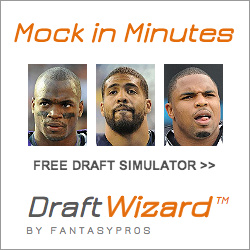 I think Luck will make some strides as a fantasy contributor this season.  He has a very good supporting cast, and I expect the Colts to put up a lot of points.

Jared covered Kaepernick in detail here, and while I have him ranked #9 on my list – I can’t argue his claim that you can make a strong case for him going in the top 8 at QB.  He is a true duel threat option, and if you aren’t taking a QB early – Kaep is a strong target.

Brady had a very underwhelming season for his standards last year.  The numbers he put up were a tale of two stories, and it all depended on if Rob Gronkowski suited up.  Reports from Patriots camp have been all over the map with respect to when/if Gronk will suit up to start the year, and as such – Brady’s stock takes a bit of a hit.

Romo is underrated as a fantasy QB.  While it can be hard to look past his December struggles – you can’t be someone who just writes him off completely.  If healthy, he can put up points with the best of them.

It is hard not to like a QB that has two top 10 options at WR at his disposal week in and week out.  And Cutler has just that with Brandon Marshall and Alshon Jeffery.  If he receives pass protection, he has the potential to provide significant returns on your investment in him.

Rivers was dead to most of the world heading into 2013, and the veteran QB had a great 2013 campaign, finishing as the 7th scoring QB on Yahoo.  I’m not willing to say that he will repeat as mid-level QB1 in 12 team formats, but Rivers is a great backup to get – or a suitable QB1 in deeper formats.

Wilson is a much better NFL QB than fantasy option – but you could do worse than ending up with him running the show for your team at the QB position.  He is a reliable, steady source of points and his totals don’t vary much from week to week so you can set your watch to his steady production.

RGIII is a wildcard.  After taking the league by storm in 2012 he suffered a major knee injury.  What followed in 2013 was a very underwhelming season after an extremely quick recovery.  He has all the talent in the world, but is a major risk in my opinion if you are banking on him to be your QB1.  As you can see by my ranking of him – it is unlikely he ends up on any of my teams this year.

Talk of the Steelers running a lot of no huddle has me intrigued at the prospects of how Big Ben will fare in 2013 – but I’m not willing to put him any higher than #16 at the QB position.  Despite the emergence of Antonio Brown, I just don’t see the supporting cast in place for Big Ben to post the numbers that he used to.

From this point on, you aren’t going to want to be relying on any of these QB’s as any sort of QB1 out of the gate in 2014.  I do like the skill set that Tannehill brings to the table – and he made strides statistically in 2013, but this is a crucial year for the third year signal caller in Miami.  He has weapons to work with and they have beefed up his OL so he can stay on his feet more via improved pass protection.

Dalton is one of the most volatile QB’s in terms of point production.  Some weeks he wins matchups single handidly, while other weeks he will cost you fantasy games.  When it comes to my QB position – that just doesn’t cut it for me, and as a result, he slots in the #18 slot in my QB rankings.

Eli had a very forgettable 2013 campaign – looking flat-out awful at times.  With only 18 TD’s and 27 INT’s, it was a brutal season for the two-time super bowl champ.  He has a long track record of being a low-end QB1 or high-end QB2 though, and I do think that he is under valued in fantasy circles heading into 2014.  I expect him to rebound to close to his old stat levels this year.

Smith is a very solid QB2 to target.  You know what you are going to get with him.  He will manage the game well, provide some yardage and chip in with modest TD totals.  If your QB1 has some injury concerns, or even if you just want to have someone waiting in the wings to save the day in case disaster strikes – Smith is a good backup QB for you to look at.

On the flip side, if you are trying to hit a home run with your QB2 slot – you may want to take a look at either Bradford or Manziel – the next two QB’s on the list.  He was having a very strong season until it was cut short due to injury, averaging 241 YPG and chipping in with 14 TD passes compared with only 4 picks.  If he can pick up where he left off – he could enter the low-end QB1/high-end QB2 range.

Manziel is a real wild card.  Can his game transition to the pros?  Will he be the man who the Browns count on as their signal caller in 2014?  I love him in dynasty formats – but in redrafts, I’m likely steering clear of him unless I land an elite QB option and can afford to roll the dice a little bit.  Too much risk here otherwise.

He’s fine as a backup fantasy QB – but don’t be fooled by his massive contract.  You don’t want to be relying on him week in and week out for your fantasy team.

McCown actually was better than Jay Cutler when he got the chance to play in Chicago last year when Cutler got hurt.  This year he moves to Tampa Bay to be the starter – and I do like him relative to his ADP.  He doesn’t have the same weapons at his disposal – but he is suitable as a backup fantasy QB.

With 4000+ yards and 24 TD’s last year, Palmer cleared the 4000 yard total and 22+ TD’s for the second season in a row.  Again, he is suitable as a backup QB – but there is little to no upside on the numbers quoted above.

Reports are that he is looking great so far in camp – and he looks poised to be the starter when the Vikings take the field in week 1.  His draft stock suffered a great deal in 2013 – as many viewed him as the top QB to go off the board for the 2014 NFL draft before the season started.  He will be out to prove his doubters wrong – and I do like him as a player – I just worry about the weapons he has at his disposal.

I actually don’t hate Fitzpatrick as a QB2 as long as Andre Johnson is playing.  Fitz put up some points at times with a far worse supporting cast in Buffalo.  He isn’t the long-term answer there, but he could sneakily have some productive weeks, and if you end up with him as your backup, hopefully he has one of those weeks when you need him to fill in for your starter’s bye week.

Schaub had a season to forget in 2013, and as such – he has found himself running the Oakland Raiders offence for 2014.  Without much of a supporting cast, it is hard to envision Schaub doing anything significant from a fantasy football perspective.

He looks great some weeks and looks completely and utterly lost in others.  With Vick lurking in the shadows, it won’t take a whole lot for Rex Ryan to make a switch.  That question will always be in the background, and as such – leave Smith alone unless you are in an extremely deep format.

I really am not a huge fan of Locker.  I don’t even really see a lot of fantasy upside in taking him.  Leave him alone unless you are in a deep format that starts two QB’s.

See above.  This is a big year for Manuel who will have to play better in order to be a long-term starter in the NFL.

Jacksonville is a tough place to play, but I do expect Bortles to see the majority of the snaps as the starter, rather than Chad Henne.  He has a great skill set, but 2014 will likely be a steep learning curve for the former UCF star.

TAKING THE LEAP In honor of Leap Day, we will be taking a leap of …