The Relay Throw on DraftKings last night featured 9 games with 50K up top.

Congratulations to “Stuckcee” who entered a single bullet into the Relay Throw and walked away with a cool 50K.

What’s up everybody?  Happy Thursday!  Today’s slate offerings are pretty spread out with the featured slate of the day kicking off at lunch time while the night slate features only 3 games.  Before we jump into today though, let’s take a look back at last nights Relay Throw first place lineup.  Congrats to “Stuckcee” who entered 1 lineup into the Relay Throw and went toe to toe with the army of 150 maxers coming out on top 50K richer.  At pitcher the lineup went with almost 60% of the field and rostered the wonder that is Shohei Ohtani (57.5% owned, 46.2 fpts) who had a masterful performance with 12 strikeouts.  I’ve run out of superlatives to describe what he is doing on the diamond.  At the other pitching slot, Charlie Morton (13.3% owned, 31.95 fpts) was slotted in and produced the 2nd best performance on the slate behind Ohtani, while being the 5th most owned.

For bats the lineup went to the Orioles courtesy of a 4 man stack, surprisingly the O’s had the highest implied team total or one of the highest depending on where you were sourcing your data.  Although it was a bit disappointing the game didn’t make it past the 6th inning due to rain the 4 man stack did enough paced by Austin Hays and his cycle in the minimum possible at-bats, four.  Outside of the Orioles stack monster performances from the single digit owned Twins 2 man correlation in Gio Urshela (2.9% owned, 33 fpts) and Carlos Correa (8.7% owned, 28 fpts) were huge factors along with Aaron Judge who stayed scorching hot, belting two solo home runs. 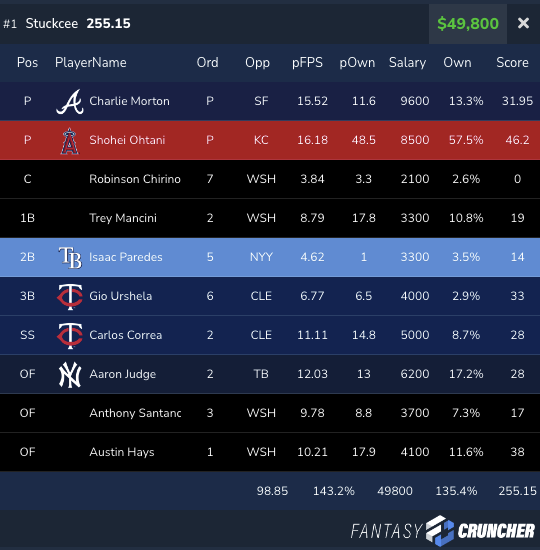 “Stuckcee” got a monster performance out of his Twins mini correlation paired with his Orioles 4 man stack to ship first!

Key Takeaway: Crazy individual performances littered throughout the lineup really pushed it to the top.  Even taking a 0 out of the catcher slot didn’t hold back the lineup from outscoring the field by almost 12 points.  Pretty wild to have your primary stack game completed after 6 innings and have a zero in the lineup and still dominate.  We’ve seen correlation at the forefront this week thus far with a 5 man and two 4 man stacks ship first after a collection of smaller combinations which we anticipated would even itself out over the long haul.

Lucas has been playing DFS since 2018. You can find his lineup review articles across MLB, MMA, NBA, NFL, and College Football on FantasyCruncher.