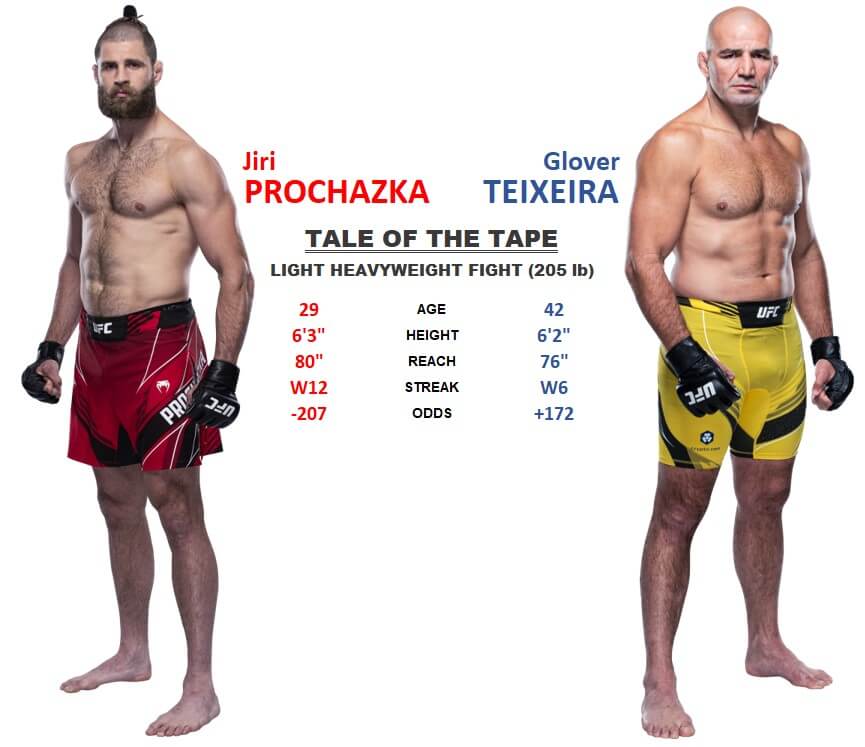 The UFC’s light heavyweight division will take center stage in UFC 275 when the division’s #2 contender, Jiri Prochazka, takes on the division’s champ, Glover Teixeira, for the light heavyweight title on Saturday in Singapore. These men are 13 years apart in age but will be locked in the same cage until a champion emerges. Both men have impressive win streaks at risk, and it is the young challenger who will the favorite to continue his. Prochazka is the betting favorite and the more expensive play in DFS contests. He is available for $8,900 on DraftKings and $22 on Fanduel. Teixeira can be rostered for $7,300 and $15 respectively. As a championship fight and as the Main Event, this fight has been scheduled for 5 rounds of MMA action, however, current odds point toward a much earlier conclusion as this fight is a -550 favorite to end before reaching the judges’ scorecards.

Prochazka has a professional record of 28-3 with 25 wins by KO/TKO, 2 wins by submission, and 1 win by decision. Since joining the UFC he is a perfect 2-0. In my opinion, however, this is not enough of a resume to earn a shot at the title. He is on a 12-fight win streak, but the competition prior to entering the UFC wasn’t anywhere near the level of the UFC elite. What he has accomplished in the UFC has been impressive though. In his debut, he defeated Volkan Oezdemir by second-round KO. He followed that up with a vicious spinning elbow to finish Dominick Reyes in the second round of his latest fight in May of last year. Both men are ranked contenders, but it remains to be seen if Prochazka has earned his number two ranking at this point.

Teixeira has an overall record of 33-7 with 18 wins by KO/TKO, 10 wins by submission, and 1 win by decision. He is one of the oldest active fighters in the UFC, but it is at this late stage in his career when he finally earned his title. He is on an impressive win streak of his own with 6 straight wins coming into this fight. This will be his first title defense since defeating then-champ, Jan Blachowicz, with a second-round rear-naked choke submission in October of last year. In fact, it is his submission game that will allow him to have a real shot at winning this fight despite being the betting underdog. He will have to contend with a 1-inch height disadvantage and a 4-inch reach disadvantage when standing upright with Prochazka.

Prochazka is a frightful opponent. He is big and strong and moves with agility for a man of his stature. On his feet, he is fully capable of getting a finish over just about any opponent. He is not, however, anything near an equal to Teixeira in his grappling. If this fight goes to the ground with time to work with, Teixeira has a very good chance at victory. In his last 6 fights, he has 4 wins by submission. Also, Teixeira is good enough on his feet to hold his own until the opportunity to grapple presents itself. For this reason, I believe the oddsmakers have overlooked his chances in this fight. I make this fight much closer to a pick ’em.

In DFS contests, this fight should be used quite a bit. Teixeira has a good chance to upset, and I prefer him more on both platforms and in all formats. Still, Prochazka is a fearsome opponent who is fully capable of becoming the next champ. For this reason, when I am not putting one of these fighters into a lineup, I will most likely be putting the other one in instead. Teixeira’s potential at a low salary, however, makes him one of my favorite underdog plays on this slate. I do not see this fight going the distance and it is currently a -200 favorite to end before reaching the midpoint of the third round. I will predict an upset here, but without complete confidence as either man may find his hand raised at the end of this one.