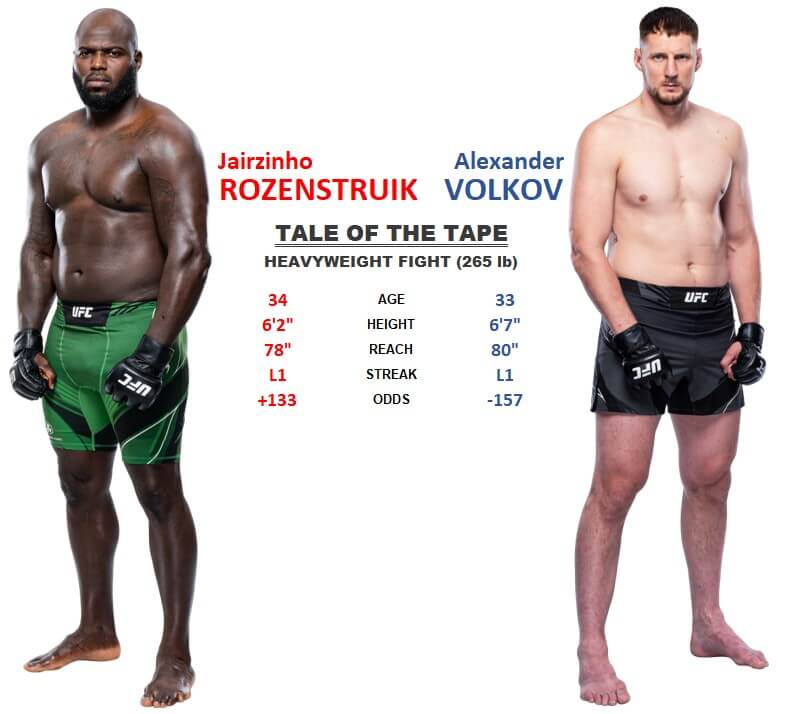 The UFC’s heavyweight division will be the focus of the MMA world when the division’s 8th ranked contender, Jairzinho Rozenstruik, takes on the division’s 7th ranked contender, Alexander Volkov, from the Apex in Las Vegas on Saturday. Both fighters were unsuccessful in their latest efforts, and Volkov is the betting favorite to right the ship in this one. He will be the more expensive DFS play, and he is priced at $8,600 on DraftKings and $19 on Fanduel. Rozenstruik can be rostered for $7,600 and $17 respectively. As the Main Event, this fight is scheduled for 5 rounds of fight action, however, current odds point toward an earlier conclusion as this fight is a -150 favorite to end before reaching the judges’ scorecards.

Rozenstruik has a professional record of 12-3 with 11 wins by KO/TKO and 1 win by decision. After winning his first 10 fights, he has gone on to lose 3 of his last 5 fights coming into this bout. This speaks more of his competition than of his lack of skill in the octagon. To date, his only losses have come from (current champ) Francis Ngannou, Ciryl Gane, and Curtis Blaydes. Only the champ has ever finished Rozenstruik. It is his power that makes him so dangerous. As evidenced in his fight with Alistair Overeem, he only needs one punch to end a fight. Although he stands 5 inches shorter than his opponent, his reach is only 2 inches less. He will have to contend with this difference if he intends to penetrate Volkov’s distance.

Volkov has a career record of 34-10 with 22 wins by KO/TKO, 3 wins by submission, and 9 wins by decision. He is 8-4 in the UFC with his only losses with the promotion coming from Derrick Lewis, Curtis Blaydes, Ciryl Gane, and Tom Aspinall. He is a tall fighter with good defense and solid striking. He doesn’t often score quick finishes, but he prefers to wear his opponents down and then will score finishes against fatigued fighters. He will attempt to weather the storm against Rozenstruik and take advantage of him as his gas tank runs out. In a 5 round fight, he will have the opportunity to wear Rozenstruik down but will have to withstand his power in order to do so.

Rozenstruik has little chance of winning a decision against Volkov who is the better boxer and has the superior length. With 11 KO/TKOs in 12 wins, however, Rozenstruik is not a fighter who looks to let the judges decide anything. Rozenstruik will be looking for his knockout punch. Volkov, on the other hand, will be looking to fight a tactical match, and will likely land with heavier volume. The judges’ scorecards should all end up in his favor if this one goes the full 25 minutes. As is typical with most of Volkov’s fights, this one projects to be about survival for the first round and a half for him, but he will look to turn things on once Rozenstruik’s energy bar has depleted. If this fight extends beyond the 2nd round, Volkov will have the advantage.

In DFS contests, although I like Volkov to win here, I prefer Rozenstruik’s ceiling at an underdog’s price tag. Over his last 5 victories, Volkov has only scored 100+ points once and averaged 82.6 FPPF (DraftKings scoring). Rozenstruik has scored 100+ in 3 of his last 5 victories and averaged 109.4 FPPF in those fights. Rozenstruik is a boom/bust play here, but his power makes him worthy of that risk. Volkov is very capable of methodically winning on points and scoring 80-90 fantasy points but at his salary that isn’t good enough to make him a great GPP play. At a below-average salary, however, Rozenstruik is very capable of putting up a big number here. For this reason, he will be my preferred play in GPP contests, but I will make Volkov my preferred fighter in cash lineups for his higher win probability.